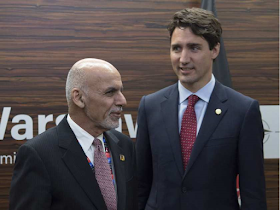 Much of this Money has gone missing .... “The World Bank is now leading an investigation into what has happened with this money ..."

Recently Trudeau increased the amount to $465 million in aid over three years for projects in Afghanistan.


According to the most recent figures from Global Affairs, Canada has disbursed about $2.57 billion in total aid ... and much of this money has gone missing.
Fears that the international community, including Canadian taxpayers, might have paid millions to fund nonexistent students, teachers and schools also adds to the complexity of reconstruction efforts.

A report by the U.S. Special Inspector General for Afghanistan Reconstruction (SIGAR) gave credence to reports of “ghost students, teachers and schools.” "Canada is currently undertaking the necessary due diligence to ensure that in the event that Canada’s funds have been misappropriated, that such funds are recovered and that the guilty parties are held to account,” said Jessica Séguin, a spokeswoman for Global Affairs Canada, in an email to the Citizen.


Afghanistan’s ambassador to Canada, Shinkai Karokhail, was not immediately available for comment, but a spokesman said the National Unity Government led by President Ashraf Ghani was determined to get to the bottom of it.

“Our government has taken the allegations seriously and the issue is under review,” said Khalid Khosraw, a spokesman for the Embassy of Afghanistan in Ottawa, in an email to the Citizen.


“I am not planning to make any changes to this commitment,” Bibeau said pending the outcome of the World Bank’s investigation.

Canada stands by it's Millions of dollars in Aid ....  http://ottawacitizen.com/news/local-news/canada-stands-by-aid-to-afghanistan-as-world-bank-investigates-fraud-allegations